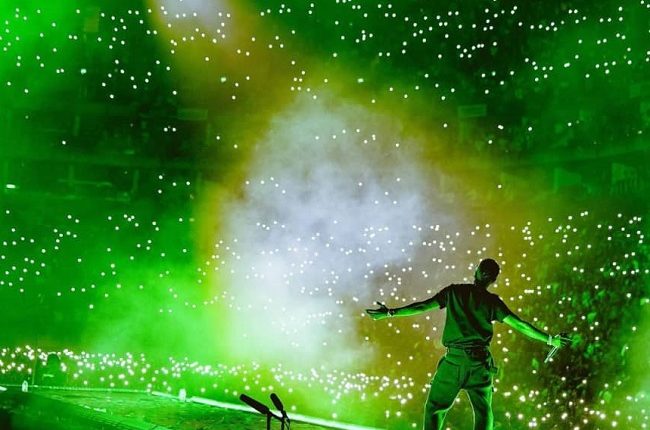 While Wizkid is still cooling off from the day one of his three-day Made in Lagos concert, social media is already abuzz with the star’s performance at the legendary O2 Arena, London. Following the performance, the first batch of the tickets to the show sold out in minutes, and the second and third batch for the new concert days also sold out almost immediately. From his dramatic entrance to the stage, his tribute to recently deceased fashion designer, Virgil Abloh, to electrifying performances, and surprise appearances from Hollywood’s biggest stars, it is safe to say that he had quite an eventful night. Yesterday, Wizkid kicked off the beginning of his O2 arena concert as he treated his 20,000 fans with premium entertainment. He brought to the stage with him other artistes like American Superstar Chris Brown. He also brough hit maker Tems, Buju with the Golden Voice, British Singer Ella Mai, and British rapper Skepta who all featured in his ‘Made In Lagos’ album, as he performed songs from there.
Tems and Wizkid sang their hit song ‘Essence’, to the delight of fans who couldn’t help but sing along to the song which was dubbed “the song of the summer” by Justin Bieber. He brought Buju on stage as for ‘Mood’, in a moment that Buju described as career-defining. The artiste took his Instagram page @bujutoyourears to share pictures of the performance, with the caption, “Shey Buju ko niyen? 20,000 plus DEEEP!! Singing back to me!! Grace, hard work and constant support from my people brought me here and I’m not going back!! @wizkidayo HIGHESTT (eagle) Love you forever!!”. Besides performing songs from his first album ‘Super Star’, Wizkid proved that he had more surprises in store for his fans, when he invited to the stage, Chris Brown who he recognised as the first guy to ever show him love internationally, and his real brother for 10 years. Breezy performed his own rendition of ‘Go Crazy’ which was a song he originally sang with Young Thug.

Chat Us
Send via WhatsApp
wpDiscuz
2
0
Would love your thoughts, please comment.x
()
x
| Reply
%d bloggers like this: